Only Sue The Insurer 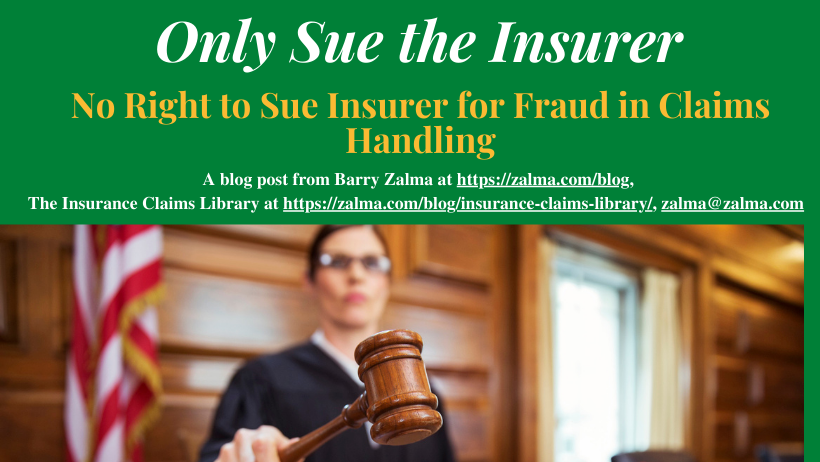 No Right to Sue Insurer for Fraud in Claims Handling

John R. Parrish sued alleging claims for breach of contract, breach of the duty of good faith and fair dealing, and fraud against the three defendant insurance companies. The claims arose out of defendants’ handling of an insurance claim submitted by plaintiff for storm damage to his home.

A court will grant a motion to dismiss if the complaint fails to allege enough facts to state a claim to relief that is plausible on its face. The court accepts all well-pleaded factual allegations of the complaint as true and views them in the light most favorable to the nonmoving party. A claim is facially plausible when the plaintiff pleads factual content that allows the court to draw the reasonable inference that the defendant is liable for the misconduct alleged.
THE FRAUD CLAIM

Claims for fraud in the inducement of the contract or as to the types and amount of coverage are examples of fraud allegations allowed with regard to insurance matters in Oklahoma. But that is not the circumstance alleged by Parrish. The petition raised no issue as to the formation of the insurance contract involved. Instead, Parrish, focused entirely on how plaintiff’s claim was handled once a claim was made under the policy. In that context, where claims handling practices under an insurance contract are at issue, Oklahoma does not recognize a fraud claim.

In Lewis v. Farmers Ins. Co., Inc., 681 P.2d 67 (Okla. 1983), the Oklahoma Supreme Court, stated that Oklahoma law recognized the two causes of action which may be asserted premised on the existence of an insurance contract:

an action based on the contract; and
an action for breach of the implied duty to deal fairly and in good faith.

The result is that here, where all the claims are premised on the existence of the contract, no fraud claim is available to the plaintiff.

The court concluded that Oklahoma law does not recognize a claim for fraud where the challenged conduct is the handling of a claim under an otherwise valid policy. Defendants’ motions were, therefore, granted.
LIABILITY OF LIBERTY MUTUAL AND SAFECO

Defendants Liberty Mutual and Safeco contend no claim is stated against them at all, as they did not issue the homeowner’s policy involved here and therefore cannot be liable on it or as to the duties arising out of it. Plaintiffs argued the extensive actions of Liberty Mutual and Safeco, and their employees, in handling the claims are sufficient to make them liable on the contract and bad faith claims, even though they were not a party to the contract.

The petition alleges that all three defendants are part of the same insurance group, that they advertise together in various ways, and that employees of Liberty Mutual and Safeco dealt directly with plaintiff and handled most or all aspects of the claims adjustment process. Plaintiff contends that is enough to make them potentially liable.

The petition does not explicitly allege that Liberty and/or Safeco are instrumentalities of American Economy nor, more importantly, does it allege facts that would support such a conclusion. The petition does, to be sure, allege substantial involvement by employees of Liberty Mutual and Safeco in handling plaintiff’s claim.

Without more, the suit only suggests a basis for concluding that Liberty Mutual and Safeco were agents of American Economy, not instrumentalities of it or of each other. Since neither Liberty Mutual nor Safeco are alleged to be parties to the insurance contract and since no plausible basis has been alleged here for concluding they were instrumentalities of the contracting party, the petition does not state a claim against either of them.

The contract and bad faith claims were dismissed as to Liberty Mutual and Safeco.
ZALMA OPINION

Because of mergers, consolidation, and specialization insurance holding companies operate multiple different insurance companies, with different names, different specialties, and management. To save expenses the holding company will employ the same staff of underwriters and claims personnel to handle claims for all of the many insurers under the control of the holding company. Each insurer is an individual entity that shares personnel with its sister insurers. In this case only American Economy insured Parrish and only American Economy could be sued for failure to fulfill the terms of the contract or for the tort of bad faith. The suit against the other insurers was simply an attempt to annoy and vex the holding company. It didn’t work. The claim for fraud couldn’t be proved in Oklahoma since anything done in the adjustment of a claim could fulfill the need to prove all of the elements of fraud.

Write to Mr. Zalma at [email protected]; http://www.zalma.com; http://zalma.com/blog; daily articles are published at https://zalma.substack.com. Go to the podcast Zalma On Insurance at https://anchor.fm/barry-zalma; Follow Mr. Zalma on Twitter at https://twitter.com/bzalma; Go to Barry Zalma videos at Rumble.com at https://rumble.com/c/c-262921; Go to Barry Zalma on YouTube- https://www.youtube.com/channel/UCysiZklEtxZsSF9DfC0Expg; Go to the Insurance Claims Library – https://zalma.com/blog/insurance-claims-library