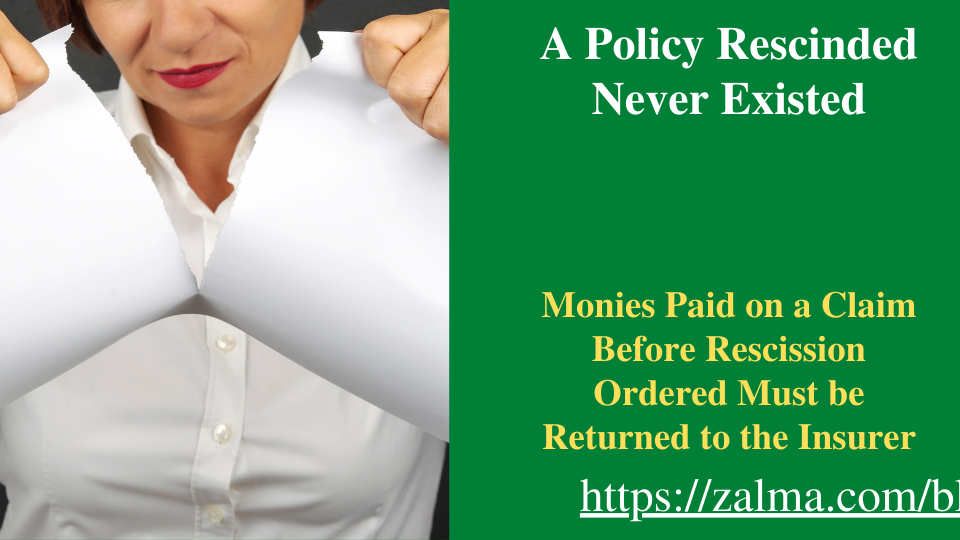 Read the full article at https://lnkd.in/gYzeFauZ and at https://zalma.com/blog plus more than 4250 posts.

In  Tanesha Taybron v. Liberty Mutual Personal Insurance Company, No. 20-10925, United States District Court, E.D. Michigan, Southern Division (May 19, 2022) the USDC resolved claims by the Plaintiff that she need not return payments made by Liberty to her before the policy was effectively rescinded.

Liberty Mutual may not recover on an unjust enrichment theory, but this does not end the inquiry, however, as the relief Liberty Mutual seeks – restitution – is inherent in the equitable remedy of rescission.

Liberty Mutual was entitled to rescind the insurance policy based upon Taybron’s material misrepresentation in her application. An insurance policy procured by fraud may be declared void ab initio at the option of the insurer. Rescission abrogates a contract and restores the parties to the relative positions that they would have occupied if the contract had never been made. The contract was annulled and the parties must be restored to the relative positions which they would have occupied if no such contract had ever been made.

Rescission Involves a Restoration of the Status Quo.

In this case, the status quo has been partially restored, in that Liberty Mutual returned the premium paid by Taybron for the policy. Unlike cancellation of a policy, which permits the insurer to keep that portion of the premiums corresponding to the period of coverage preceding cancellation, rescission requires a full refund of the premiums paid.

In order to restore the status quo, as if the contract had never been made, so too must Taybron return the amounts paid to her or on her behalf under the policy.

Taybron obtained benefits as a result of a misrepresentation in her insurance application. In this regard, she is primarily responsible for her own unjust enrichment.

Liberty Mutual paid $21,921.05 to or on behalf Taybron under a policy that was properly rescinded. Restitution in that amount to Liberty Mutual returns the parties to the status quo and avoids the retention of a benefit that was wrongfully obtained.

While obtaining a judgment confirming rescission Liberty Mutual protected itself by paying the claim under a reservation of rights. It rightfully required return of the money paid since the policy – by law – never existed and the court agreed it was entitled to restitution.

Subscribe and receive videos limited to subscribers of Excellence in Claims Handling at locals.com