No Cover for Punitive or Treble Damages 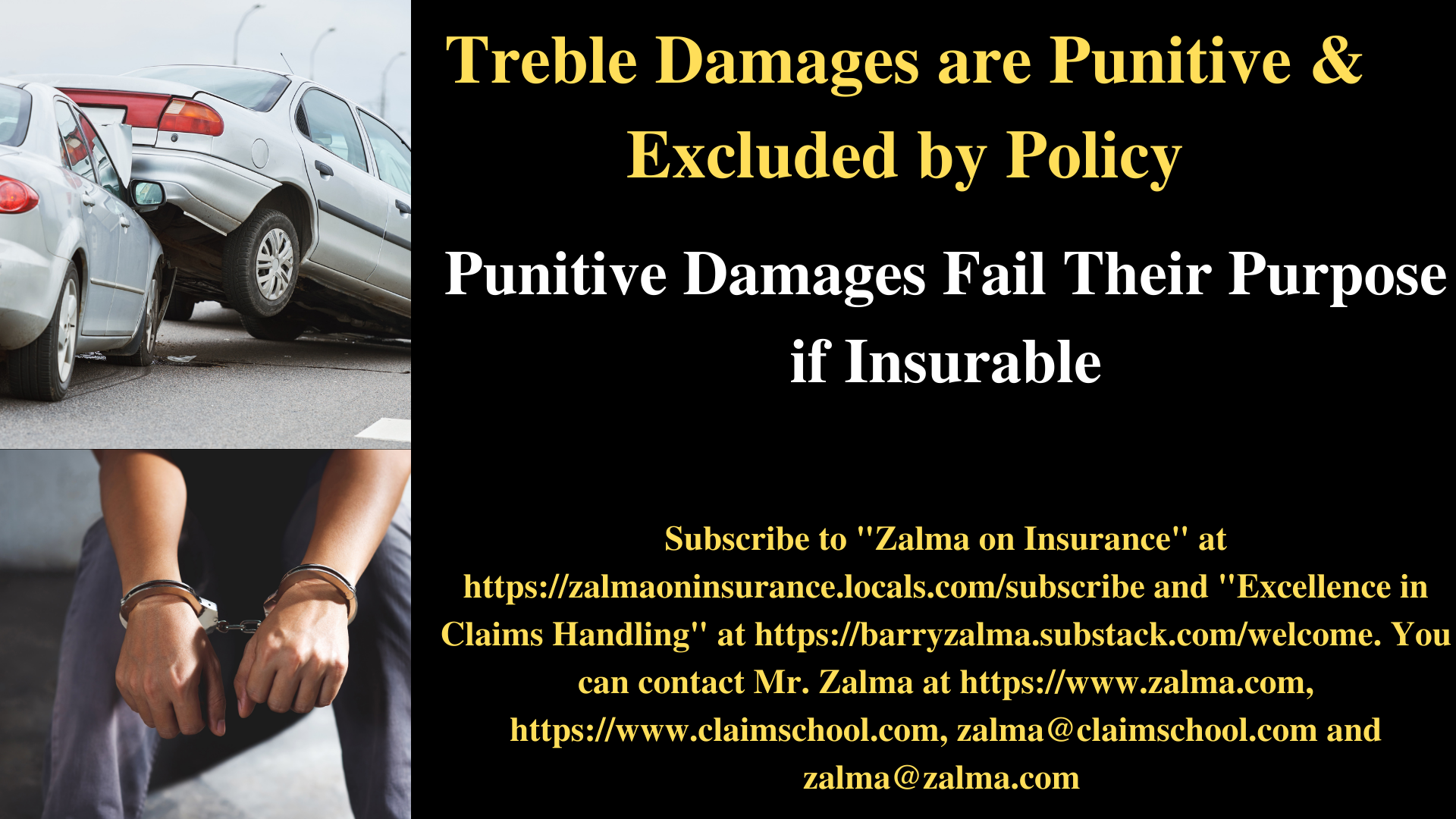 Read the full article at https://www.linkedin.com/pulse/treble-damages-punitive-excluded-policy-barry-zalma-esq-cfe and at https://zalma.com/blog plus more than 4050 posts.

Progressive Direct Insurance Company (insurer) alleged treble damages pursuant to the statute did not apply to its insurance policy because punitive damages were clearly excluded.

The trial court stated the issue for adjudication was whether public policy required statutory treble damages to be excluded from the policy's coverage.

The obvious public policy behind the treble damages provision is to provide an added level of deterrence against hit-and-run drivers who damage attended vehicles. The Legislature's public policy for imposing a criminal penalty and the treble damages in 47 O.S. § 10-103 were to create a deterrence by imposing punitive measures upon a driver "involved in an accident who did not fulfill the requirements of 47 O.S. § 10-104 and fled the scene of the accident.

Generally, a statutory multiplier for damages has a punitive nature when damages are meant to punish "the wrongdoer" and to act as a deterrent to others.

It should be axiomatic, and it is in Oklahoma, that an insurer and insured are free to agree to a policy's provisions. The exclusion for intentional acts and punitive damages was conspicuous, plain and clear and the Supreme Court concluded that trial court was correct when it refused to allow coverage for the punishment damages established by the statute.

You can subscribe to "Zalma on Insurance" at https://zalmaoninsurance.locals.com/subscribe and "Excellence in Claims Handling" at https://barryzalma.substack.com/welcome.

Processing
Voice note recorded successfully
Record
Recording 00:00
Commenting has been turned off for this post.
Sponsored
Categories
Read More
Other
Zalma's Insurance Fraud Letter - December 1, 2020
ZALMA’S INSURANCE FRAUD LETTER DECEMBER 1, 2020 Read the full Zalma's Insurance Fraud...
By Barry Zalma 2020-12-01 14:08:15 0 263
Other
A Video Explaining the Standard Mortgage Clause in a Property Insurance Policy
The Mortgage Clause to a Property Insurance Policy Read the full article at...
By Barry Zalma 2021-02-24 13:26:46 0 243
Other
No Bad Faith Tort for other than Insurance Breaches
Third Party Claimant has no Right to Tort Damages for Bad Faith by Other Party’s Insurer...
By Barry Zalma 2021-03-31 13:14:03 0 218
Health
Drei weitere wichtige Coronavirus-Heilmittel, die uns die Massenmedien vorenthalten!!!
Drei weitere wichtige Coronavirus-Heilmittel, die uns die Massenmedien vorenthalten – alles...
By Medic Ineman9 2020-12-21 20:41:39 0 382
Religion
Sowing And Reaping
Let me ask you a question. Do you believe God wants to bless you? You may say, "Yes," but in your...
By Alamo NLP 2020-09-16 12:47:52 0 348