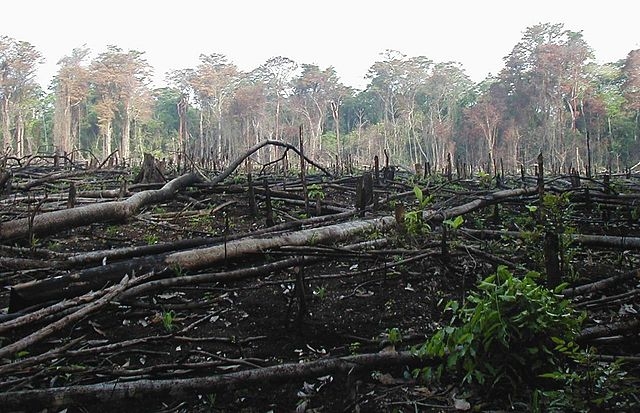 The toll of illegal lumber practices and timbering in the Philippines is difficult to accurately calculate. There is the financial toll of course, measured by the numbers in accordance where there is a preponderance of evidence and where people have actually been caught hauling illegal timber.

This alone is tragic though regrettably it could also be understandable when you consider the financial desperation and the economic standing of a great many of these people … many of whom are only looking to put food on the table and will never get rich from their work … much less enjoy the “truly profitable” spoils of the illegal lumber trade. The environmental toll on the other hand is virtually incalculable.

Trees such as Mahogany and Teak take a great many years to grow and that alone is a tragedy that will quite literally take lifetimes to repair. Add in the other problems such as environmental damage and increased damage from storms and other natural disasters that would be greatly lessesned from proper forestation and … the total damage truly is incalculable in any accurate measure.

It is not uncommon for veneer logs (the most valuable lumber resources) to take a lifetime or more to grow. Unfortunately, when these ancient forests are cut down illegally, there is no management program in place and certainly no concentrated effort at reseeding or replanting. If there is to be an alternative to the illegal lumber industry in the Philippines it has to be a program that shows results within something less than a lifetime if it is going to be effective.

While we would like to think that people are inherently “good” and want to “do the right thing” it is not feasible to ask generations of families to starve while waiting on Mother Nature to fulfill her part of the bargain. Thus, for anything to replace this hardwood, it has to be something that provides both hardwood and other assorted timber and lumber products within a few years, not a period of time measured in lifetimes or even decades.

The financial market for these hardwoods is what makes the entire venture viable despite it being illegal and carrying very heavy penalties. Thus, any replacement for the illegal lumber industry in the Philippines must in itself be profitable enough to offset the “lost” income once the illegal lumber industry is shut down. It is almost guaranteed that a small portion of the people involved in this trade would continue.

The environmental damage from the timber industry may appear at first glance to be a much more unattainable goal but in fact it is quite easily resolved with the proper incentives and a selective use of tree species readily available for a great many different environments.

There are numerous issues with the proper care and maintenance of forestation and forest management that are often overlooked or casually dismissed by people on both sides … within the timber industry and within the conservation movements. Dead growth has to be cleared out in order to prevent out of control forest fires such as we have seen in Yellowstone and in other areas around the globe.

When the lands are cut off entirely from human influence, the results can be every bit as damaging as when there is too much human influence. This all worked great and fine when the earth was more barren of human and animal life but if the goal really is a more symbiotic relationship between humans and the earth there has to be some compromise from both sides of the table.

Thus, any efforts to reduce illegal lumbering and the ensuing environmental damage must … bear with me on this point please … have some influence from humans but not too much human interference.

So what we need if we want to end the illegal lumber and timber industry in the Philippines is a tree that grows relatively fast. The Paulownia trees that do grow in the Philippines are generally ready for initial harvesting inside of three years and veneer logs can begin being harvested in as little as eight years.

To end illegal lumbering we also need trees that are profitable. The lumber from the Paulownia trees is highly prized (and valued) for its benefits in home construction, arts, crafts and even for musical instruments. Top dollar is paid for the Paulownia Lumber across Asia and in many other parts of the world.

While some exceptions may have to be made in National Law to allow for the export of lumber, the laws, based as they are on the Lacey Act and the methods for growing the Paulownia trees being well within the constraints of the Lacey Act, this should not be a major difficulty in arranging.

Finally we need a tree that is going to be beneficial to the environment, manageable and not requiring “too much” management.

Yet again the Paulownia trees fit all of these criteria quite nicely. The trees remove excessive levels of nitrates from the soil increasing crop harvest levels, they roots stay in place, thus preventing erosion and landslides, the leaves are highly proteinous and when used as a food supplement help to increase livestock weight and production and when allowed to grow fully, they help to prevent wind and storm damage that makes it through some of the more sparsely leafing trees.

Ending the illegal lumber industry in the Philippines is not nearly the impossible task that a great many people tend to believe it to be.

If there is any downside to this solution at all it is that the Paulownia trees do need to be properly managed in order to prevent them from over-running the existing, natural ecosystems that are in place.

As for the illegal timber industry, it is more a matter of looking at what can be done rather than trying to fix “solutions” that have never yet proven to be effective for anything more than short periods of time and do not do anything to solve the problem of illegal timber, much less the causes behind it.