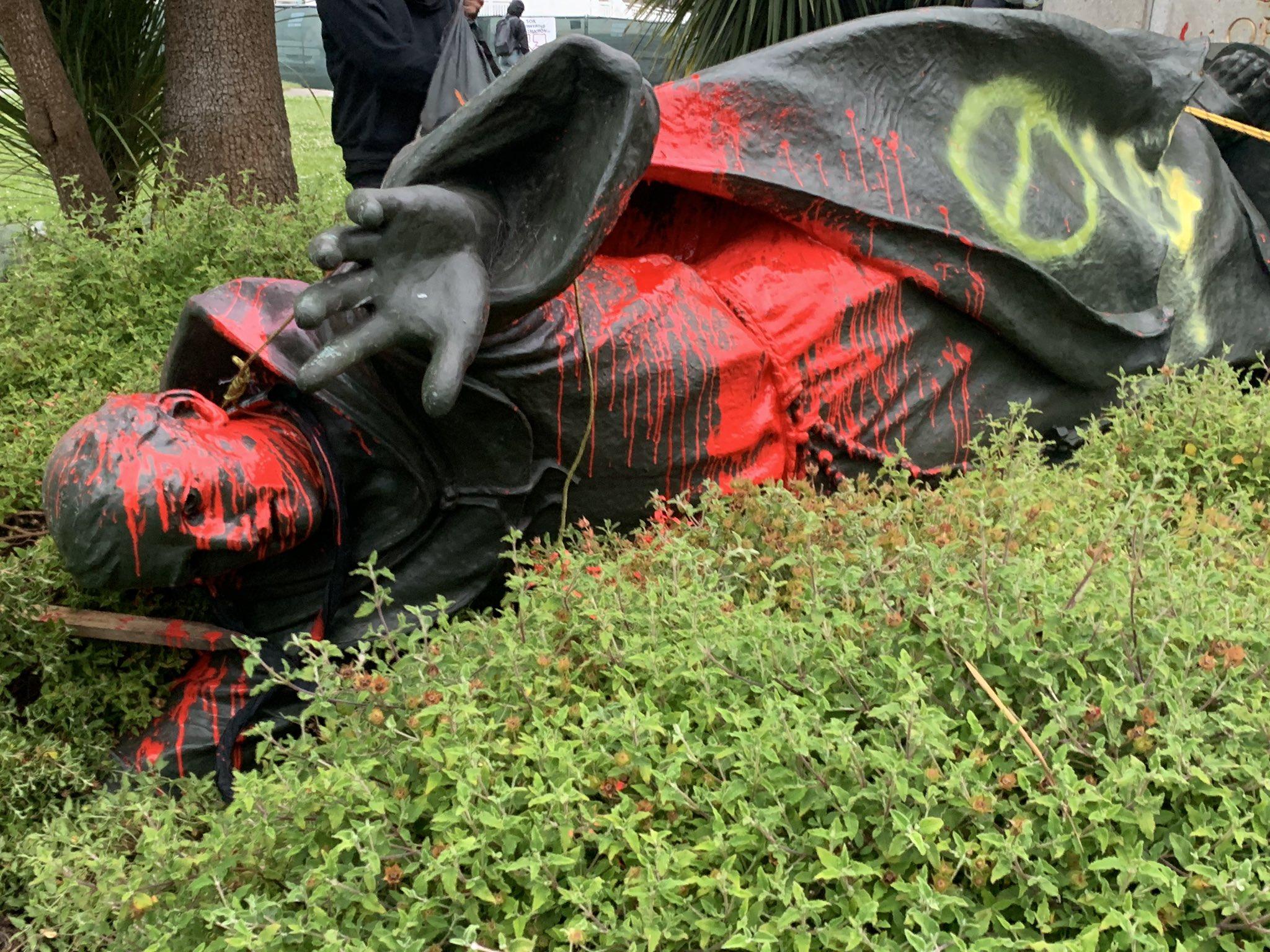 These are not protesters...
These are degenerate , emotionally retarded , mindless rabble that has been whipped up into a frenzy by the media and the DNC..
These are unhinged , brain damaged idiots who dont even know why they are "protesting" or who they are protesting..
All they know is what the programming has told them to do and say...
In between their Cancel culture online stalking and their destruction of private and public property, all they know is ORANGE MAN BAD and White is racist.
Liberalism is a plague and a disease.
Unfortunately for us , we dont have the luxury of "protesting" we have been kept subservient to paying bills to live..
I hate the fact that we have been mired down by the government and cant counter the actions of the unhinged, violent , radical domestic terrorists the DNC and media has created..
Antifa , BLM , MS-13....All of these are violent and militant extensions of the DNC and their propaganda machine.

Activists toppled the statue of Francis Scott Key, who wrote the lyrics to the “Star Spangled Banner” Friday evening in Golden Gate Park in San Francisco.

Per nbcbayarea.com , protesters tore down statues of people in history across the country, condemning them for their ties to slavery, all on Juneteenth, the day to celebrate the freeing of enslaved people over a century and a half ago.

2
Please log in to like, share and comment!
Search
Sponsored
Categories
Read More
Theater
MoveOnOrgy investing millions to foil Trump's Plans!
Dear MoveOn member Stupid Sheep, CNN FakeNewsNetwork has released a series of shocking text...
By TKDRL Mogwai 2022-04-24 23:20:32 0 89
Politically Incorrect
My Other Dream
Right before I dreamed about Joe Biden getting clubbed in the head, I dreamed that the Biden's...
By Defiant America ​ 2022-02-26 20:11:57 5 229
Other
Insurer's as Victims Entitled to Restitution
When a Claim is Paid as a Result of a Crime Insurer Must Demand Restitution Read the full article...
By Barry Zalma 2021-08-13 12:36:59 0 179
Other
"Insurance Fraud Volume I" Second Edition
INSURANCE FRAUD IS EPIDEMIC Second Edition of "Insurance Fraud" Now Available Read the full...
By Barry Zalma 2022-03-13 14:33:35 0 168
Other
Man Bites Dog Story: GEICO Sues Health Care Providers for Fraud
RICO Violations by Health Care Providers Require Court to Enjoin Arbitrations Read the full...
By Barry Zalma 2021-08-03 12:11:58 0 257