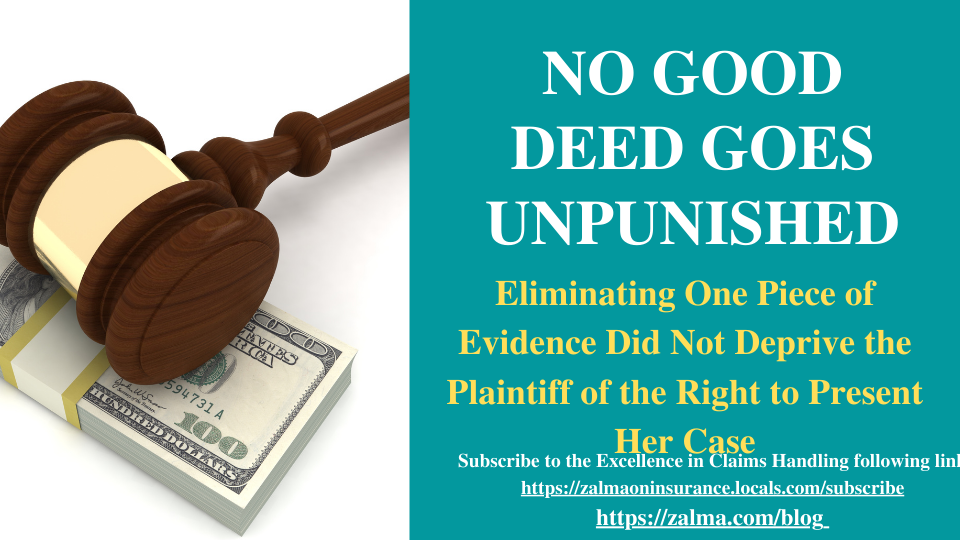 Posted on August 2, 2022 by Barry Zalma
Eliminating One Piece of Evidence Did Not Deprive the Plaintiff of the Right to Present Her Case

See the full video at https://rumble.com/v1eegpl-no-good-deed-goes-unpunished.html and at

After Reaching a Settlement of multiple claims presented against her insurer that was also the insurer of the third party, Connie Humes sued for bad faith and violation of the Unfair Trade Practices Act (UTPA). Humes appealed trial rulings by the trial court, excluding evidence of certain settlement amounts paid by Farmers Insurance Group, in a trial of her injury claims.

THE ISSUE BEFORE THE MONTANA SUPREME COURT

Did the District Court abuse its discretion by excluding evidence of settlement amounts paid in a global settlement of multiple claims by Farmers Insurance Group in a subsequent trial of claims under the UTPA?

Barney Benkelman rear-ended Humes’ vehicle at a stoplight in Helena, causing injury to Humes. Benkelman was covered by Farmers Insurance Exchange (FIE) for bodily injury liability. Humes was insured by Mid-Century Insurance Company (Mid-Century), including underinsured motorist coverage (UIM) with a $250,000 limit, and medical payment coverage (med-pay) with a $50,000 limit.

Farmers considered the accident a “dual-insured” loss, which occurs when parties involved in the accident are insured by the same company.

Humes retained counsel, and made first-party UIM and med-pay claims under her Mid-Century policy. Mid-Century requested Humes undergo another medical examination and subsequently denied continuing med-pay benefits. Humes then filed suit stating claims against Benkelman for negligence (Benkelman claim), and against Mid-Century for breach of contract for denying UIM coverage (UIM claim), breach of contract for denying med-pay coverage (med-pay claim), and breach of the implied covenant of good faith and fair dealing for alleged mishandling of her first-party claims (breach of covenant claim).

FIE offered Humes $40,000 to settle the Benkelman claim. Humes declined the offer. Thereafter, all parties participated in a “global mediation” session. During the mediation, FIE and Humes settled the Benkelman claim for the policy limit of $100,000. About 48 hours thereafter, Humes and Farmers settled Humes’ claims against Mid-Century for a payment of $220,000-$200,000 under the UIM policy and $20,000 under the med-pay policy. Thus, all four of Humes’ claims in the underlying action were settled for payments totaling $320,000.

In its trial memorandum filed less than a month before trial, Farmers asserted for the first time that it had paid a portion of the settlement to Humes in the underlying action with funds from its “SAE Group,” a department assigned to handle bad faith claims. Farmers stated it “should be allowed to present evidence that [its] bad faith department paid an additional $50,000 on top of UIM and medical payments settlements” in the underlying settlement.

Farmers argued that Humes was attempting to use the final settlement amount as proof Farmers “valued her injuries at $320,000, and there’s not foundation for that …. [T]hey want the jury to assume that because we paid 320 to resolve multiple claims, that that is an absolute slam dunk admission that our earlier offers for her [injury] damages were too low.”

Consequently, Humes was prohibited only from stating the specific amounts of the settlement under her Mid-Century coverage and the total Farmers had paid to settle all four claims.

Following a five-day trial, the jury determined FIE and Mid-Century did not violate the UTPA and that the insurance companies had a reasonable basis in law or fact for their conduct while negotiating Humes’ claims.
DISCUSSION

Humes argued the District Court’s exclusion of the specific settlement values prevented her from “showing the degree to which Farmers intentionally undervalued Humes’ claim against Benkelman” and thus from proving her case under § 33-18-201(13), MCA.

The difficulty with Humes’ argument is that Farmers did not pay $320,000 to settle “the exact same claim” for which it initially offered $40,000, nor, as further argued in her briefing, was Farmers’ ultimate settlement “eight times the value of its offer going into mediation.”

Humes’ arguments are internally inconsistent. Farmers ultimately paid $100,000 to settle “the exact same claim,” and the District Court permitted Humes to present these specific amounts to the jury. The relevance of the settlement amounts excluded by the District Court was debatable.

The use of the $320,000 aggregate value as proposed by Humes was to “prove” the value of one claim, when, to the contrary, this amount settled four claims. A trial court may exclude relevant evidence “if its probative value is substantially outweighed by the danger of unfair prejudice, confusion of the issues, or misleading the jury.” Unfair prejudice may arise from evidence that confuses or misleads the trier of fact, or unduly distracts the jury from the main issues.

Contrary to her argument Humes was given broad leeway to present significant evidence in support of her allegations of improper claims handling by Farmers.

Humes introduced evidence of the short period of time between Farmers settling the Benkelman claim and then settling the Mid-Century claims multiple times, and she argued this demonstrated improper leveraging by Farmers. Humes presented correspondence showing Hunt had authority to settle for policy limits within a week after Fox demanded it, but instead gave Farmers’ attorneys permission to offer only the $40,000.

Humes’ expert, attorney John Morrison, when asked about Hunt’s $40,000 offer, commented that “it was only a month or a month-and-a-half later that Farmers comes in and pays, not only the full policy limits, but significantly more than that.” The testimony from Fox and Morrison clearly supported Humes’ theories that Farmers leveraged and undervalued the Benkelman claim. Humes was clearly able to present factual evidence and expert testimony supporting her argument that Farmers “failed to promptly settle” the Benkelman claim “in order to influence settlements under” her UIM policy, in violation of § 33-18-201(13), MCA.

Farmers presented evidence to support its defenses that its adjustors had a reasonable basis for disputing the causation and severity of Humes’ injuries, and that liability in excess of the policy limits for the Benkelman claim was not reasonably clear, justifying the delay in both third and first-party settlements. An insurer may not be held liable under this section if the insurer had a reasonable basis in law or in fact for contesting the claim or the amount of the claim, whichever is in issue. The jury received this evidence, including almost three days of testimony in Humes’ case-in-chief, and ultimately found Farmers’ adjustors had acted reasonably.

The Supreme Court concluded that it could not fault the District Court’s determination that Humes was not “prevented from putting on evidence supporting her theories regarding how the insurers valued her claim. Rather, the order at issue only prevented Humes from using one piece of evidence-the settlement amount-and its omission did nothing to prejudice her case.”

The Supreme Court concluded that the District Court did not abuse its discretion in its evidentiary rulings; for the same reasons, it likewise did not abuse its discretion in denying Humes’ motion for a new trial. Considering the evidence Humes was able to present, the District Court’s denial was not so significant as to materially affect [her] substantial rights.
ZALMA OPINION

Some people cannot be satisfied with the settlement of a law suit, even when they get what they ask for and enter into a formal settlement with the assistance of a mediator. Filing a second lawsuit under the UTPA and then attempt to bring in to evidence the original settlement amount as if it was only paid for her injuries when the insurer’s evidence showed it included bad faith damages paid from a special fund maintained by the insurer. Ms. Humes was simply not satisfied with the litigation and settlement she reached only to try for more. Even though Farmers folded and paid what she asked. The jury and the Montana Supreme Court refused to allow her to profit from her accident.

Please log in to like, share and comment!
Search
Sponsored
Categories
Read More
Science
AGES TO COME
Ages to comes shall see revival of wisdom to those who shall inherit your place on this star....
By Nibbie Chase 2020-06-19 23:47:57 0 801
Other
Unambiguous Policy Condition Must be Enforced
To Obtain Full Replacement Cost Insured Must Repair or Replace Within Two Years of Loss Read the...
By Barry Zalma 2021-10-05 12:22:44 0 322
Other
True Crime Stories of Insurance Fraud Number 11
The Dishonest Chiropractor/Physician See the full video at...
By Barry Zalma 2022-02-03 14:09:03 0 176
Other
The Little Book of Ethics for the American Lawyer
The Lawyer Who Violates the Rules of Professional Conduct Must Be Disciplined Read the full...
By Barry Zalma 2020-12-10 14:18:45 0 420
Other
Training Required of an Excellence in Claims Handling Program
Every Professional Claims Person Must Understand Insurance Read the full article at...
By Barry Zalma 2021-11-04 13:20:02 0 296