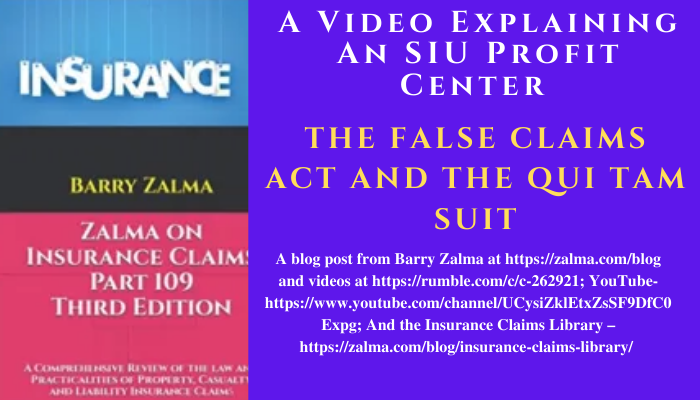 The False Claims Act, also known as the “Lincoln Law,” dates back to the Civil War. President Lincoln signed the act into law in 1863 because war profiteers were selling the Union Army shoddy supplies at inflated prices. The original law included qui tam[1] provisions that allowed a private person (plaintiff) to sue those who defrauded the federal government. If the suit was successful the plaintiff would receive 50% of any recovery from the defendant.

“Qui tam” is an abbreviation of the Latin phrase “qui tam pro domino rege quam pro si ipso in hac parte sequitur” meaning “Who sues on behalf of the King as well as for himself.” There are a number of pronunciations of the Latin abbreviation qui tam. The simplest is key tam (rhymes with “ham.”) Black’s Law Dictionary suggests kweye (rhymes with “eye”) tam.

The False Claims Act makes it unlawful to knowingly (1) present or cause to be presented to the United States a false or fraudulent claim for payment or approval, 31 U.S.C. § 3729(a)(1) (2006); (2) make or use a false record or statement material to a false or fraudulent claim, § 3729(a)(1)(B); or (3) use a false record or statement to conceal or decrease an obligation to pay money to the United States, § 3729(a)(7) (2006). Under the Act, “relators,” may file civil actions known as qui tam actions on behalf of the United States to recover money that the government paid as a result of conduct forbidden under the Act. As an incentive to bring suit, a prevailing relator may collect a substantial percentage of any funds recovered for the benefit of the government. To establish civil liability under the False Claims Act, a relator generally must prove (1) that the defendant made a statement in order to receive money from the government; (2) that the statement was false; and (3) that the defendant knew the statement was false.

The Insurance Frauds Prevention Acts across the country that have qui tam provisions provide a weapon to insurers and their SIUs to deter insurance fraud by taking the profit out of the crime. Insurers will find that a qui tam action against fraud conspiracies can become a major profit center and a serious deterrent to those who are unafraid of becoming one of the rare arrests and who commit insurance fraud without concern for any downside to the crime.