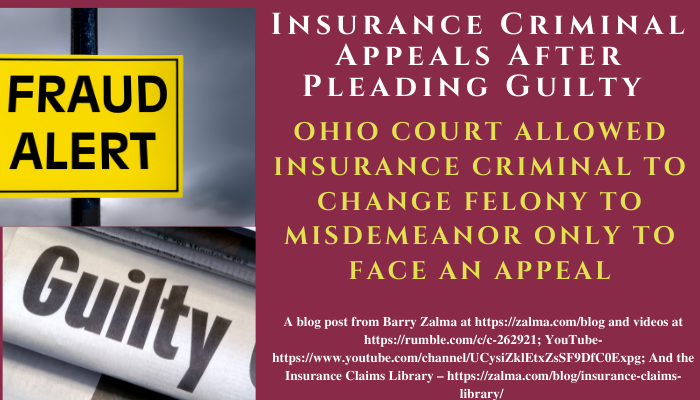 Read the full article at https://www.linkedin.com/pulse/insurance-criminal-appeals-after-pleading-guilty-zalma-esq-cfe and at https://zalma.com/blog plus more than 3950 posts.

Sandy Diane Pinney, appealed the March 2, 2021 judgment of the Ashtabula County Court of Common Pleas overruling her motion to dismiss due to pre-indictment delay, and the March 30, 2021, judgment sentencing her to twelve months community control on one count Insurance Fraud. In State Of Ohio v. Sandy Diane Pinney, 2021-Ohio-3483, No. 2021-A-0013, Court of Appeals of Ohio, Eleventh District, Ashtabula (September 30, 2021) the Ohio Court of Appeal dealt with the claim.

Ms. Pinney, a fairly incompetent insurance fraud perpetrator, in October 2018, staged a fall on a broken egg while shopping at Wal Mart. Much to her surprise, she was actually injured and suffered a broken ankle. Wal Mart denied her insurance claim and she received no monetary compensation. An investigation was submitted to the prosecutor’s office in 2019.

In reviewing a trial court’s decision on a motion to dismiss for preindictment delay, the court reviews only the legal issues, but affords great deference to the trial court’s findings of fact.

When unjustifiable preindictment delay causes actual prejudice to a defendant’s right to a fair trial despite the state’s initiation of prosecution within the statutorily defined limitations period, the Due Process Clause affords the defendant additional protection.

Insurance criminals have no honor. After the prosecutors allowed Pinney to plea to a misdemeanor and avoid a return to jail, with unmitigated gall and a total lack of appreciation for the kindness provided to her by the prosecutor and the court, appealed the conviction because it took the prosecutor too long to arrest her while she was in jail on another charge. Her arguments on appeal were specious and she should have had her plea withdrawn and convicted – at trial – on the felony. She got nothing other than waste the time of a trial and court of Appeal.