Are Preppers a Threat to Society? 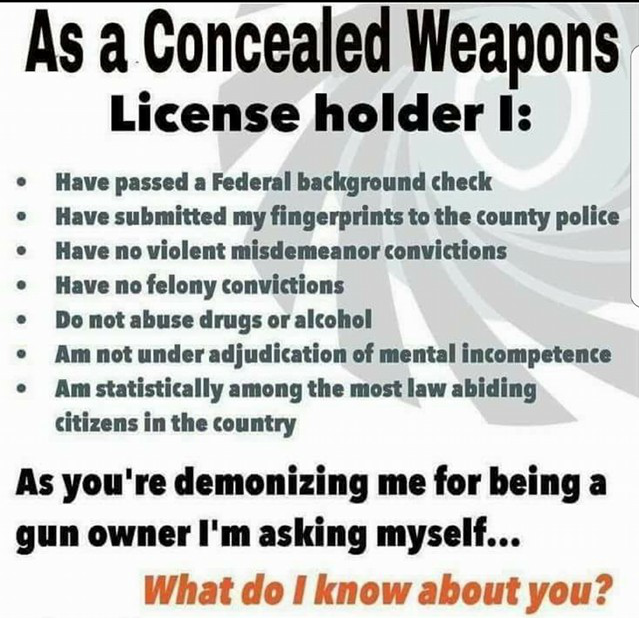 According to the National Defense Authorization Act or NDAA, reports commissioned by the past two presidential administrations (W and Obama) and numerous local, county, state and federal law enforcement agencies, the average American Prepper presents a clear and present danger to society. Apparently, the desire to merely remain free and to be left alone indicates a major security concern for some unknown reason.

All of the political jargon aside though, it is an interesting enough subject that merits looking at and considering, and for any of the readers who may in fact be law enforcement agents, your comments, feedback, thoughts, views and opinions are especially appreciated.

Does the average American Prepper present any threat to “Civilized Society”?

A great many preppers are CCW permit holders … Concealed Carry Weapons Permit Holders … which can mean only one thing, though some people see it differently:

Government View of CCW Permit Holder: Potential threat. Armed. Scary people who may need to be shot even during a routine traffic stop. How many YouTube videos are there of cops getting enraged upon discovering that the individual they have stopped, lawfully or not, is licensed to carry a concealed weapon or carrying in an open carry State?

Reality of CCW Permit Holder: The CCW Permit Holder has gone through very comprehensive and intrusive government inspection, meaning that statistically, the CCW license holder is one of the most law-abiding citizen classes of the nation. The person with a concealed carry permit, has undergone at least a modicum of firearms training and has been shown to be capable of safely and properly handling their firearms. Exactly what part of Law-Abiding, well-trained and armed individual is a threat to any kind of government in a land that is truly free? None perhaps? (For an interesting view, look at the number of people killed each year by Law Enforcement Agents and look at the number of people killed annually by those armed citizens lawfully defending themselves and their properties)

Government View of “Hoarders” and “Preppers”: The NDAA states very clearly that any American citizen “hoarding” more than a seven day supply of foods is apparently guilty of a crime and can have their stores and goods stolen … excuse me, I mean legally (though not lawfully) confiscated by the Federal Government, most notably during times of “Emergencies” … though there is no limitation on the extent of any so-called emergencies, though it is not like our illustrious and “representative” dear leaders would ever arbitrarily enforce laws is there? Oh wait. Never mind. Anyhow, the mere act of a citizen being prepared for a long-term disaster is seen somehow or another as an illegal action by the government and the legal system.

The Reality of “Hoarders” and “Preppers”: According to one scientist over at a little place called NASA, their scientists (Under the leadership of Dr. Pete Riley) have determined that between 2012 and 2022 there is a twelve percent chance of a Mass Coronal Ejection (CME) or Solar Flare of a sufficient strength to effectively knock out the electrical grid completely. If such an event were to occur, it would take literally years to rebuild the national infrastructure. During many hurricanes and other natural disasters, it often takes months for the basic infrastructure to be rebuilt and made functional again. Disasters are not a matter of “if” but only a matter of “when”. Back before the days of Political Correctness run amok, virtually any Boy Scout could tell you that their motto was in fact, “Be Prepared” … though judging by the fact that they now allow girls into the Boy Scouts and pass out condoms at scout camps, perhaps they have just changed the focus of their preparedness merit badges?

(Does a girl get extra credit and merit badges for carrying condoms or does she merely receive a derogatory nickname, become stereotyped and get ostracized for being one of “those girls”? In this day of the #MeToo movement, should the Scouts be passing out condoms at camp at all? Or even integrating and inundating the campgrounds with both teen-aged males and females away from home for the first time and anxious to explore their individual growths … pun intended? PC culture is far too arbitrary to ever know for certain, but then again, it has to be in order to produce such selective faux rage I suppose)

Many natural disasters have also left far too many people stranded with no means of support. In some instances, the (formerly) independent States have taken quite some time before calling in FEMA and the Federal Government for “Support and Assistance”, often leaving vast numbers of people stranded, sometimes in less than sanitary conditions and lacking even the most basic of needs. Yet somehow or another the individual who is prepared for just such a contingency is a threat to civilized society. This brings to mind a question about what would happen in the event of a truly catastrophic and devastating SHTF Scenario. If (God forbid) there were an absolute societal collapse, would the average American Prepper become the threat that apparently the government believes them to be? What would be the most common scenarios for SHTF? Societal Collapse is the first thing that comes to mind … so let us consider such a scenario to determine if … perhaps this is why the government perceives the Prepper to present a Clear and Present Danger to the remnants of Society after SHTF:

INNER CITIES AFTER SHTF: Believe it or not, there actually do exist a great many people who believe that foods come from the grocery store. One loony statist actually told me that no animals died to feed her because she got her steaks from the grocery store, she did not hunt them like us knuckle dragging, mouth breathing barbarians do! Seriously, a lot of people really do believe that food comes from the grocery store … like they go back in the back rooms and just extract produce from their posteriors. Nope, no need for farming there … I just pulled this beef right out of my … ask somebody else before you go eating burgers at their house maybe.

When those store shelves are empty, there will be massive rioting. We have seen this activity occur throughout the larger cities of the nation after natural disasters when people apparently learn to eat and digest large screen televisions and over-priced sneakers as those seem to be the first targets of the looters. Grocery stores and convenience stores will be looted dry in short order. After that, bring on the starving masses and more intense rioting, people literally killing each other over morsels of food. It is almost inevitable that if government is still functioning, that martial law will have to be declared in whatever remains of the cities … but that is not automatically going to grant them access to the means of production … for that they must move out into the countryside as well … provided of course that enough of the countryside still exists.

The Average Prepper After SHTF: The average American Prepper is very likely to have a very comfortable, if not simple home out in the woods somewhere, far away from the “benefits” of “civilized society”. Furthermore, if they have selected wisely, they will have a very defensible homestead. It is also very likely that they will have invited some of their friends to stay with them at said prepper homestead. It is very likely that these average preppers will have large stores of food, potable water and other basic necessities of life, hopefully of a sufficient quantity to last for months if not years. Furthermore, the average American Prepper is very likely to have a good supply of both firearms and ammunition, though hopefully also the ability to reload the spent cartridges and maybe, if they are smart, even the ability to repair firearms … a skill which will be very much in demand after the worst case of SHTF. The average American Prepper will probably have their power back up and running within the first week at the outside most.

The well stocked prepper may even have a small library, while most of this would probably be survival manuals, they may take on a new meaning after SHTF and become very popular reading materials for his friends who just thought he was paranoid before SHTF actually happened. They may have a few musical instruments, like guitars, banjoes, mandolins or others. Board games and other means of entertainment are not uncommon on the average American Prepper Paradise.

In short, the common American Prepper is going to be sitting at home, fairly comfortable, lights working, eating well, and able to defend his property should he find the need to do so. What remains a question here, is exactly how this becomes some kind of imminent danger to the remnants of “Civilized Society”? Are these bureaucrats so dense that they honestly believe that the preppers are going to leave the comforts of their well-lighted and powered, comfortable homes, full of friends, family, entertainment and food, to trudge into whatever remnants of the inner-cities and other bastions of “civilized society” remain, only to participate in looting empty store shelves and joining the starving masses? What part of that scenario makes any sense whatsoever?

At the end of the day, the only threat that the average American prepper presents to anyone, is that of any homeowner defending what is rightfully theirs, and even then, only if they are attacked first. While the government may find it distasteful or even disturbing that some of us choose to actually be prepared and not depend on government benevolence, this is not in any way a lawful crime. If there is any crime here at all, it is a government that would try to criminalize the common citizen, for merely wanting to be prepared for any number of catastrophic disaster (natural or man made) and other likely contingencies.