A Video Explaining the Difference Between a Claim & a Suit

A Video Explaining the Difference Between a Claim & a Suit

See the full video at https://youtu.be/t7Vs3meMgig 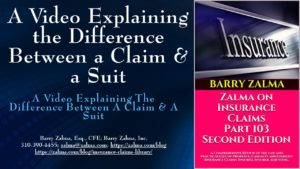 Liability policies generally contain language promising “to defend any suit against the insured.” The policies will generally distinguish between a claim and a suit by compelling the insured to give notice of claims as well as suits. Courts usually recognize that there is a difference. A claim can be made without a suit being filed. A mere statement by a claimant to an insured that he or she was injured as a result of the negligence of the insured is sufficient to give notice of a claim. A “suit,” on the other hand, usually requires the filing of allegations in a court of competent jurisdiction responding to the allegations made in the suit.

Most insurance policies require that the insured promptly or “as soon as possible” report a claim to the insurer even if there is no suit. By so requiring the insurer has the ability to investigate and try to resolve claims before expensive litigation begins.

Liability insurers prefer claims made policies to limit their exposure. The person or entity insured must, under such policies, report a claim as long as it is made during the policy period or an extended reporting period or lose coverage.

Over the last 52 years Barry Zalma has dedicated his life to insurance, insurance claims and the need to defeat insurance fraud. He has created the following library of books and other materials to make it possible for insurers and their claims staff to become insurance claims professionals.