360 Months in Prison Not Enough for Pill Mill Operator 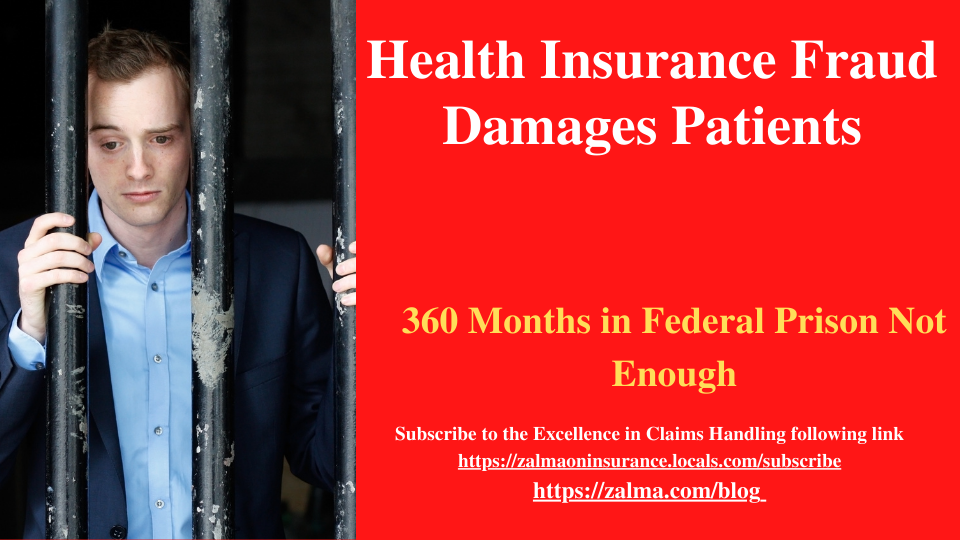 360 Months in Federal Prison Not Enough

Read the full article at https://www.linkedin.com/pulse/health-insurance-fraud-damages-patients-barry-zalma-esq-cfe and sthe full video at https://rumble.com/v1hz00x-360-months-in-federal-prison-not-enough.html and at https://youtu.be/iDLtRvB7P2o and at https://zalma.com/blog plus more than 4300 posts.

The evidence at trial showed that CCMC prescribed large quantities of opioids to patients who had no medical need for them and ran an allergy-testing and treatment scheme in which it required insured patients to undergo allergy testing and prescribed them medication despite their negative allergy tests. The clinic billed Medicare and private insurers for the tests and treatments.

Ifediba and Ozuligbo were indicted on substantive counts of health care fraud, conspiracy to commit health care fraud, money laundering of the clinic’s unlawful proceeds and conspiracy to commit that crime. Ifediba was indicted for unlawfully distributing controlled substances for no legitimate medical purpose and for operating CCMC as a “pill mill” to distribute the controlled substances to patients who had no medical need for them.

After a three-week trial featuring testimony by CCMC patients, medical experts, and law enforcement officials, the jury convicted Ifediba and Ozuligbo on all counts. The court sentenced Ifediba to 360 months of imprisonment and Ozuligbo to 36 months.
BACKGROUND
CCMC Operated as a Pill Mill and Required Insured Patients to Undergo Allergy Testing and Treatment.

Ifediba and his wife, Uchenna Ifediba (“Uchenna”), also a physician, were the only physicians at CCMC. Neither Ifediba nor his wife specialized in pain-management medicine, but they wrote many prescriptions for controlled substances-opioids. CCMC attracted patients who were willing to wait over three hours in a dirty, crowded waiting room to receive prescriptions for controlled substances.

Besides its opioid distribution, CCMC roped patients who had insurance into an allergy fraud scheme. The scheme was a simple one. Every insured patient who came to CCMC had to fill out a questionnaire on allergy symptoms before seeing the doctor. No matter the patient’s answers, an allergy technician performed a skin-prick allergy test on the patient. Regardless of whether the test results were positive or negative, Ifediba prescribed immunotherapy to treat allergies and directed the technicians to order the medication.

Other patients also failed to receive the immunotherapy treatment their insurers paid for.

Insurer Blue Cross Blue Shield of Alabama (“BCBS”) noticed the unusually high volume of allergy-related claims coming from CCMC and announced that it would audit the clinic. In preparation for the audit, Ifediba told clinic staff, including Ozuligbo, to change patient records, turning negative allergy test results to positive and marking allergy symptoms on the patient questionnaires.

A grand jury indicted Ifediba and Uchenna, charging them with multiple counts of unlawfully distributing controlled substances outside the course of professional practice and for no legitimate medical purpose. They were also indicted for conspiracy to distribute the controlled substances and for using and maintaining CCMC for the purpose of distributing controlled substances. All these charges concerned the prescribing of pain-management substances. The indictment also charged Ifediba, Uchenna, Ozuligbo, and Ebio with conspiracy to commit health care fraud through the allergy fraud scheme and substantive counts of health care fraud based on the records of specific patients. It further charged that Ifediba, Uchenna, and Ozuligbo laundered the proceeds of the illegal scheme. Uchenna, who had suffered a severe stroke, was dismissed from the case as incompetent. Ebio pled guilty to one count of conspiracy to commit health care fraud and agreed to testify against Ifediba and Ozuligbo.
The Jury Heard Evidence of Health Care Fraud

The government’s medical expert, Dr. Jim Christensen, told the jury that it was “[a]bsolutely not” appropriate to test patients for allergies just because their health insurance would pay for the test. The Court Convicted and Sentenced the Defendants.

The court sentenced Ifediba to 360 months of imprisonment and Ozuligbo to 36 months.
ANALYSIS
Sufficient Evidence Supported Ifediba and Ozuligbo’s Convictions.

An appellate court must affirm a conviction unless there is “no reasonable construction of the evidence” from which the jury could have found the defendant guilty beyond a reasonable doubt. United States v. Garcia, 405 F.3d 1260, 1269 (11th Cir. 2005).
Patient Records Were Sufficient to Support Ifediba’s Convictions for Substantive Health Care Fraud.

The jury convicted Ifediba of 10 counts of substantive health care fraud, in violation of 18 U.S.C. § 1347(a). To be convicted in a health care fraud case, the defendant must be shown to have known that the claims submitted were, in fact, false.

For each of the counts Ifediba challenges, patient files and billing records demonstrated that he or his co-conspirator, Uchenna, ordered treatment knowing that it was medically unnecessary. Although the patients did not need what he prescribed, he nevertheless made fraudulent representations to the insurers that the patients needed allergy treatment. Testimonial evidence confirmed that Ifediba likely knew the treatment was unnecessary but billed insurers for it anyway.

Thegovernment’s medical expert, Dr. Jim Christensen, testified that it was “inappropriate” to prescribe immunotherapy to someone who tested negative for allergies.  The testimony of fraud investigators for the insurers confirmed that CCMC submitted allergy-related claims for these patients. Further testimony showed that Ifediba personally signed all the bills charging Medicare and private insurers for the medically unnecessary treatment, thereby defrauding them through false claims.

The paper trail and testimony illustrating Ifediba’s fraudulent representations are enough for a jury; live testimony from patients, while helpful, is not required. As a result the court affirmed the jury’s verdict on the four counts of health care fraud.
Sufficient Evidence Supported Ozuligbo’s Conviction for Conspiracy to Commit Health Care Fraud.

To sustain a conviction for conspiracy to commit health care fraud in violation of 18 U.S.C. §§ 1347 and 1349, the government must establish beyond a reasonable doubt that:

There was more than sufficient evidence to demonstrate that CCMC defrauded insurers through an allergy fraud scheme. Patient medical records illustrated that Ozu-ligbo knew of the conspiracy to provide immunotherapy treatment to patients who had tested negative for allergies.

Ozuligbo’s conversation with Special Agent Bullock supports an inference that she knew about the nature of the conspiracy and participated in it. Bullock arranged to meet Ozuligbo at her house for an interview. Standing in her driveway, Ozuligbo told Bullock that she performed allergy tests and provided immunotherapy at CCMC when she used to work there. She told him that CCMC “only did allergy testing and immunotherapy for patients with insurance” because “it was expensive and cash-paying patients wouldn’t pay for it.” On the verge of tears, she told him, “I left there to get away from that craziness and all the crazy patients, and now I work for peanuts.” Id. at 58.

From this evidence, the jury readily could have found that Ozuligbo knowingly participated in a conspiracy to bill for medical services that were not actually medically necessary or delivered to the patients.
Ifediba’s Sentence Was Procedurally Reasonable.

The court noted the trial evidence illustrating that CCMC supplied controlled substances to people who had no medical need for them. Evidence also demonstrated that Uchenna wrote her share of “bad prescriptions,” CCMC provided an “exponentially higher amount of prescriptions” than other clinics of its size, and the clinic likely engaged in unlawful drug distribution before and after the conspiracy period.

Health insurance fraud, like that perpetrated by the defendants, has caused the cost of health care for honest, ill or injured people and needs to be stopped. When the fraud is coupled with distribution of controlled substance to drug addicts and others who had no medical reason for the drugs, the physicians are violating their oath to “first do no harm.” The sentences were, considering the harm done to the public, insurers and the government health care plans, were kind and when they get out of jail the defendants will probably live well off the fruits of their crime.

Please log in to like, share and comment!
Search
Sponsored
Categories
Read More
Politics
ICE Agents Ordered to Free All Illegal Aliens in Custody: ‘Release Them All’
Immigration and Customs Enforcement (ICE) agents, tasked with enforcing federal immigration law,...
By Meme King 2021-01-23 17:59:51 1 1269
Other
Failure to Timely Sue Defeats Claim
Private Limitation of Action Provision Enforceable Read the full article at...
By Barry Zalma 2022-11-11 13:13:27 0 47
Politically Incorrect
Dicks Out For de Blasio [Re-Uploaded]
https://archive.ph/dV5Jz You know it really is a shame that all the solons and gyms with tanning...
By Scathing Take 2020-05-05 17:17:54 0 539
Other
A Video Explaining the Need for Subrogation
Investigation Needed to Effect a Right of Subrogation Read the full article at...
By Barry Zalma 2020-10-22 13:01:31 0 405
True Crime
True Crime of Insurance Fraud Video Number 60
My Paintings Were Stolen Read the full article at https://lnkd.in/gnkSByzU and se the full video...
By Barry Zalma 2022-04-22 13:40:57 0 157