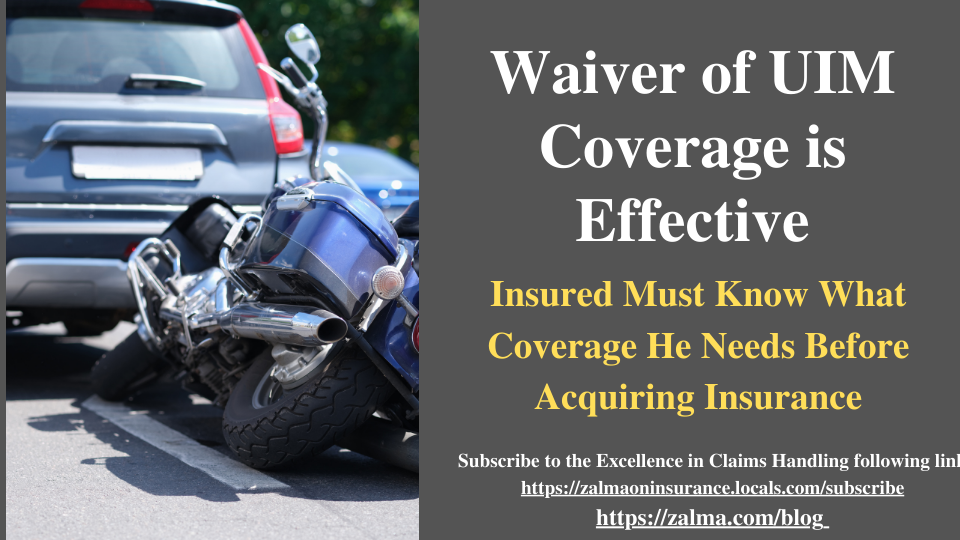 Waiver of UIM Coverage is Effective

Read the full article at https://zalma.com/blog

Insured Must Know What Coverage He Needs Before Acquiring Insurance

On June 7, 2015, Bryan Koch (“Koch”) was driving his 2013 Harley Davidson motorcycle while his wife, Rhea Lynn Koch (“Mrs. Koch”) was riding with him as a passenger. Mrs. Koch was killed in the accident and Koch suffered injuries that required the amputation of his left leg above his knee.

Progressive Direct filed a motion for summary judgment, Progressive Direct argued that Koch’s rejection of UIM coverage in 2004 was still effective and carried forward through the addition and deletion of different motorcycles and never affirmatively changed this designation rejecting UIM coverage.

The purchase of uninsured motorist and underinsured motorist coverages are optional. an insured must sign written rejection forms with certain stated language in prominent type and location in order to knowingly and voluntarily reject each type of coverage.

Progressive Direct presented evidence that it had consistently sent Koch policy renewals which stated that Koch had rejected UIM coverage.

Koch executed a valid waiver of UI and UIM benefits and the Progressive Direct representative was not required to give Koch additional notice of a particular benefit or to obtain another UIM rejection form.

Some insurers believe those they insure know what insurance they need and can select or not select important coverages. Mr. Koch knew he needed protection from uninsured motorists but did not know he needed underinsured motorist coverages. The court had no choice but to follow the statutory law of Pennsylvania and refuse to allow him a coverage for which he did not order, did not pay for the coverage, and had waived the right to the coverage. As much as we would like 20/20 hindsight does not make a coverage that is not there.