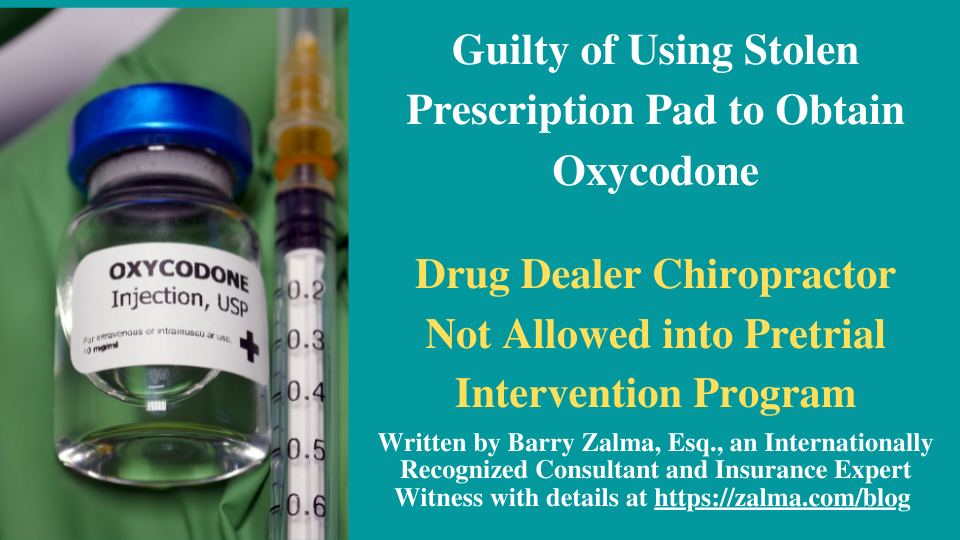 Mittleman is a chiropractor. He stole another doctor’s prescription pad. Over the next twenty-two months, Mittleman submitted false prescriptions to obtain thousands of oxycodone pills.

Mittleman applied for admission into the PTI program. The Morris County Prosecutor’s Office rejected his application.

A Law Division judge entered an order denying Mittleman’s motion to compel his entry into the PTI program.

The following month, Mittleman pled guilty to third-degree insurance fraud. In accordance with the plea agreement, Mittleman was sentenced to one year probation with a condition that he surrender his chiropractic license during the probationary period.

To overturn a prosecutor’s rejection, a defendant must clearly and convincingly establish that the prosecutor’s decision constitutes a patent and gross abuse of discretion.

The prosecutor also considered Mittleman’s use of the oxycodone.

The appellate court rejected Mittleman’s arguments concerning factual errors by the prosecutor because those arguments were not supported by the record and affirmed the trial court’s decision.

For a health care provider to steal a prescription pad and obtain for his personal use and distribution to others oxycodone illegally to seek admission to the PTI program would have allowed him to avoid his admitted criminal conduct. That he appealed the denial after being allowed to plead guilty to only one count and be sentenced only to probation was unconscionable.

Random Thoughts on Insurance Volume XIV: A Collection of Blog Posts from Zalma on Insurance available at amazon.com.