Assignment of Claim After Release Signed is Worthless 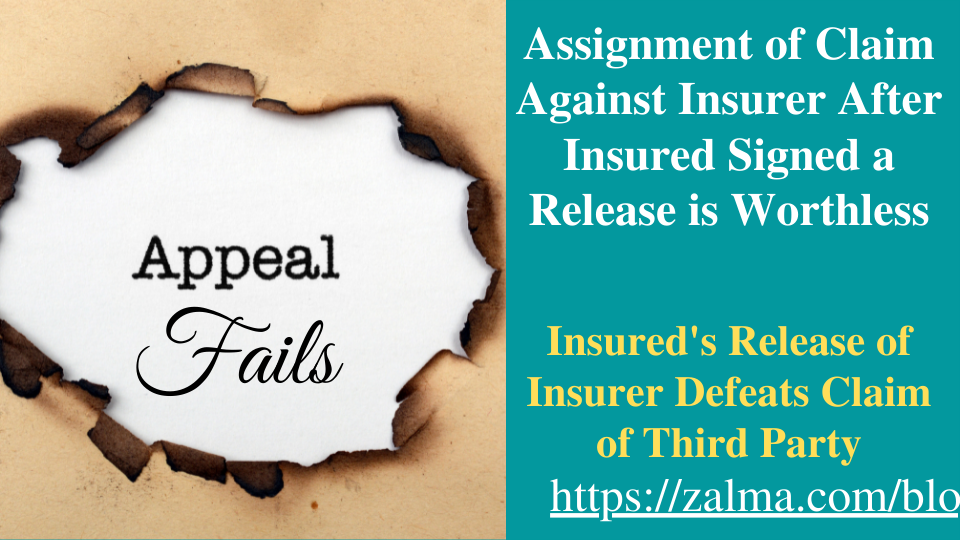 Read the full article at https://www.linkedin.com/pulse/assignment-claim-against-insurer-after-insured-signed-barry and at https://zalma.com/blog plus more than 4250 posts.

When a CT Scanner was destroyed as a result of two fires at the storage facility claims were presented and suits filed against the warehouse, Blocker Storage. Blocker was insured by Associated Indemnity, a Fireman’s Fund Company and part of the Allianz group of insurers. Associated paid its limit of liability and received a release from the insured for Associated and all of the related companies.

In 2001, Blocker Storage and Fireman’s Fund executed a “Release of All Claims” to resolve the declaratory judgment lawsuit. Blocker Storage and Fireman’s Fund “agree[d] that the limit of liability coverage available, pursuant to the terms and conditions of the [p]olicy, for the [first] fire [wa]s $100,000.” In exchange, Blocker Storage released “Fireman’s Fund, its employees, adjusters, agents[,] and attorneys” from: all liabilities identified in Blocker [Storage]’s complaint including, but not limited to, the matter of number of occurrences, the matter of the limits of insurance available and the alleged breach of contract. This [r]elease includes, but is not limited to, all claims for contractual damages, extra-contractual damages, “bad[]faith” damages, whether statutory or common law, consequential damages, tort damages, attorney fees, expert costs, expenses and interest, arising out of or related to the allegations in Blocker [Storage]’s complaint.

Diagnostic Leasing argued that the district court erred in granting summary judgment for Associated Indemnity on its bad faith claims but the Eleventh Circuit disagreed.
Agency

Under Florida law, once the insured releases the insurer from liability, the insured no longer has a cause of action against the insurer and neither does an injured third party.

Diagnostic Leasing won a judgment against Blocker Storage for almost one million dollars only to give up trying to collect from the responsible defendant by taking an assignment against Blocker Storage’s insurer who had, before the assignment, released the insurer. Greed and hope of getting the full judgment plus punitive damages from an insurer Diagnostic and its lawyers failed to do their due diligence to deal with the release and tried to avoid the release by going after a sister insurer of the named insurer. A waste of time and effort.
No alt text provided for this image