The Effect of the Tort of Bad Faith on the USA 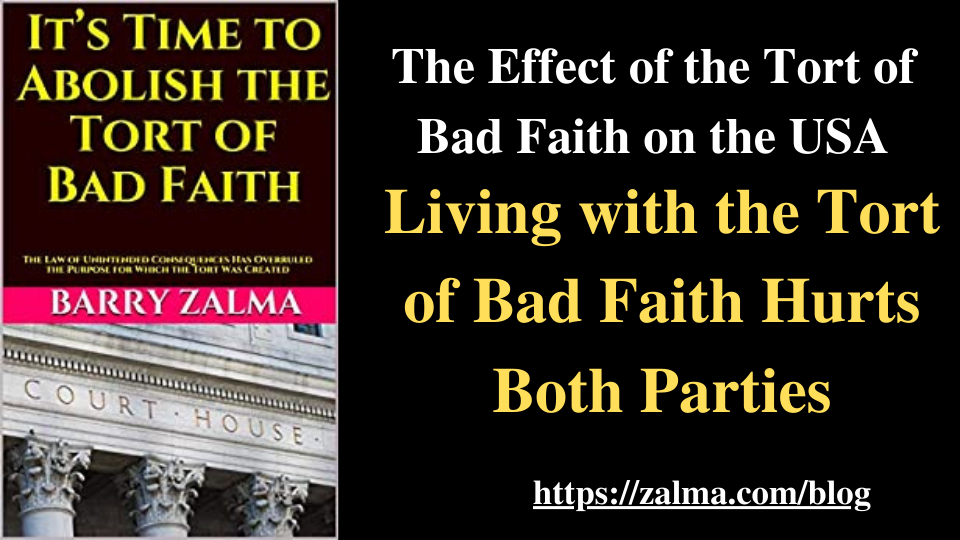 Living with the Tort of Bad Faith Hurts Both Parties

It is indisputable that in the 1950’s, 1960’s and 1970’s the insurance industry abused some insureds to avoid paying legitimate claims. Without a factual basis, insureds were accused of arson or other variations on insurance fraud.

Indemnity payments were refused on the flimsiest of excuses. People were found to have diseases that only horses could catch. Disability payments were refused because an insured was wheeled in her wheelchair to church one day and, therefore, was not totally house-confined. Insureds were driven into bankruptcy when reasonable demands within policy limits were refused.To stop this abuse, the courts of the state of California invented the tort of bad faith.

It took a universal contract remedy and decided that the breach of an insurance contract without, what the court decided was proper, genuine or even fairly debatable reasons, was transferred from a contract breach into a new tort. Many other states have followed the lead.

Persons perpetrating the fraud would, in most cases, accept the refusal as a cost of doing business and went on to the next fraudulent claim.

After the recognition of the tort of bad faith, those who perpetrated fraudulent insurance claims that were denied went to lawyers instead. Suits for bad faith popped up like wild flowers in the desert after a rainstorm.

Insurers need to recognize that since the 1950’s when the tort of bad faith was created, courts more frequently, recognizing the abuse of the tort of bad faith, find that the a “fairly debatable” issue of law like the application of a private limitation of action provision of a policy will defeat both a breach of contract and a bad faith claim.