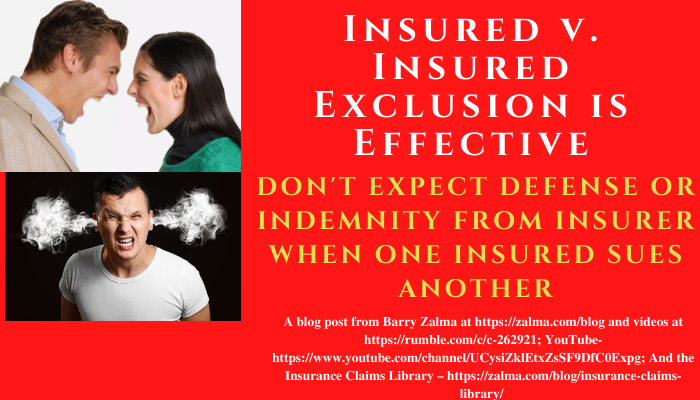 Read the full article at https://www.linkedin.com/pulse/insured-v-exclusion-effective-barry-zalma-esq-cfe and at https://zalma.com/blog plus more than 3950 posts.

Navigators Insurance Company sought to resist defending its insured, Joshua Donald Tarter, in a 2018 lawsuit filed in the United States District Court for the Eastern District of Kentucky. Relying upon what is known as the “insured versus insured exclusion” in its Directors and Officers Liability policy, Navigators claimed that it had no duty to defend Joshua in what can be described only as a high-stakes family feud. Joshua then sued Navigators, both alleging that the company breached its contract with him and seeking a declaration that Navigators was obligated to defend and indemnify him in the underlying litigation. In Joshua Donald Tarter v. Navigators Insurance Company, No. 21-5129, United States Court of Appeals, Sixth Circuit (October 25, 2021)

The district court concluded that Navigators’ position in the dispute was sound and granted the company’s motion to dismiss the lawsuit.

Any semblance of family cooperation ended, however, when Joshua, together with Thomas Gregory and Xiaofeng Chen, formed a Chinese shell company, Hong Kong QMC Industry Company, Ltd. According to allegations in a lawsuit that C-Ville Fabricating, Anna Lou, LuAnn, and Douglas eventually filed against Joshua, Gregory, and QMC, the shell company was responsible not only for selling supplies to the Tarter Companies from China at grossly inflated prices, but also for embezzling trade secrets from the Tarter Companies.

The insured vs. insured exclusion, like the family exclusion, is a key method used by insurers to avoid the potential collusion between insureds to solve their disputes by making a claim to the insurer. When one insured sues another insured it is difficult, if not impossible, to avoid collusion and are as contentions as the noxious party-wall suits where no one really wins and where the insurers always lose. The Sixth Circuit read the policy as a whole and made agreed that the District Court’s decision was obviously proper.