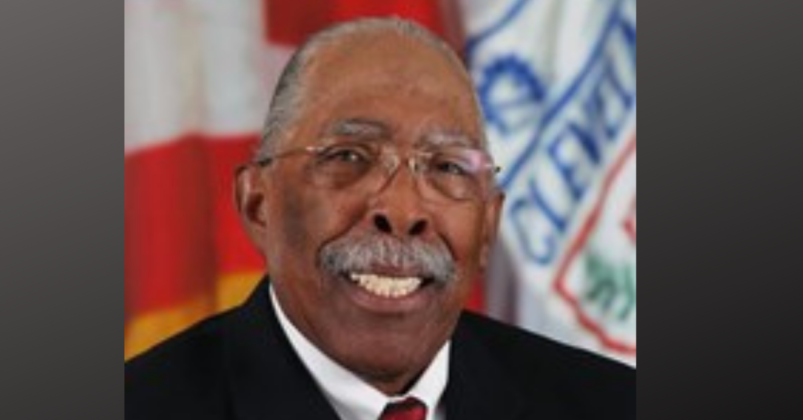 A longtime Dem councilman from Cleveland was busted today and charged with defrauding the city out of more than $127,000 over an eight-year period.

Kenneth Johnson was elected in 1980. He was arrested by FBI agents in Cleveland after a federal grand jury came back with a 15-count indictment. Johnson is facing multiple charges and it does not look good for him. With the Feds closing in on the corruption in Chicago too they may be on their way to cleaning up our cities.

“The allegations set forth in today’s indictment detail the exploitation of public office for personal gain,” said Acting U.S. Attorney Bridget M. Brennan. “Such conduct may bring about a temporary financial benefit for those involved, but it harms the public’s confidence in its elected officials. Where an elected official is alleged to have disregarded their oath and obligations, the public should remain confident that we will not disregard ours.  Allegations of public corruption will be thoroughly investigated and brought before the court for a final resolution.”

“These individuals are accused of developing and implementing schemes to defraud hardworking American federal taxpayers,” said FBI Special Agent in Charge Eric B. Smith.  “Citizens should have confidence that their elected representatives are ethical and law abiding, not enriching themselves through graft and deceit.  The FBI will continue to root out fraudsters that portray themselves as civil servants and hold them accountable.”

“This indictment represents our continuing resolve to root out fraud and corruption in all forms, particularly when the programs involved should have been used to help our neediest families and the communities in which they live,” said HUD OIG Special Agent in Charge Brad Geary. “It is our continuing core mission to work with our law enforcement partners and the United States Attorney’s Office to protect the integrity of our housing programs and to take strong action against those who seek to illegally benefit from them.”

“When public officials choose to betray the public’s trust for personal gain, our system of government is negatively impacted,” said Bryant Jackson, Special Agent in Charge, IRS Criminal Investigation, Cincinnati Field Office. “Therefore, in partnership with the U.S. Attorney’s Office and our law enforcement partners, IRS Criminal Investigation gives priority to investigations involving the alleged breach of the public trust by government officials at any level.”

Robert Fitzpatrick worked for the city of Cleveland in the Division of Recreation. Fitzpatrick was charged in a Bill of Information for his role in the scheme and pleaded guilty on February 8, 2021.

According to the indictment, from January of 2010 through October of 2018, defendants JOHNSON, JAMISON, Fitzpatrick, and others known and unknown to the Grand Jury, are accused of conspiring together to commit federal program theft in order to enrich themselves and others. JOHNSON and his conspirators are accused of inducing the city of Cleveland to issue reimbursement checks from the city’s general fund to JOHNSON for Ward 4 maintenance expenses that were never actually performed. From July 2009 to June 2019, the city received Community Development Funds via the Department of Housing and Urban Development (HUD) that were deposited into the city’s general fund.

The indictment states that around 2010, JOHNSON and JAMISON approached Fitzpatrick and asked him to perform maintenance services in Ward 4. These tasks included cutting grass, checking on properties, assisting with snow removal and looking for potential homes that could be renovated and sold for a profit. Fitzpatrick performed these services for approximately six weeks and was never paid by JOHNSON nor JAMISON. Fitzpatrick did not perform any ward services after the initial six weeks and continued to receive his salary from the city.

It is alleged that JAMISON regularly delivered timesheets to Fitzpatrick that purported to reflect the hours and maintenance services he performed in Ward 4 and instructed him to sign them. Fitzpatrick complied, even though he did not actually perform any ward services beyond the initial six weeks.

As part of the alleged conspiracy, JAMISON delivered these timesheets to JOHNSON for his approval and JOHNSON included them with his “Council Member Expense Reports,” which were submitted to the city in order for reimbursement as eligible council-related expenses. In addition, JOHNSON attached receipts to his expense reports that made it appear that he had paid Fitzpatrick, in cash, for Ward 4 services. These receipts purportedly bore Fitzpatrick’s signature.

From January of 2010 through October of 2018, the indictment alleges that JOHNSON requested the maximum reimbursement – $1,200 – each month on his expense report for ward services that Fitzpatrick seemingly had performed. Based on records, the city issued $1,200 in monthly expense reimbursement checks to JOHNSON, totaling approximately $127,200. According to the indictment, each reimbursement check from the city was deposited into a personal bank account owned by JOHNSON.

JOHNSON is also charged for a conspiracy to commit theft of federal program funds dispersed to The Buckeye Shaker Square Development Corporation (BSSDC) via community block grants. The indictment states that, from September of 2013 through June of 2019, JOHNSON, HOPKINS and three other unnamed persons (known to the Grand Jury but not charged) conspired together to commit federal program theft.

Furthermore, the indictment states that from in or around December 2013 to in or around March 2018, HOPKINS signed no less than approximately $50,000 in BSSDC checks issued to third parties, including the three unnamed persons. These checks were later deposited or transferred into bank accounts held and controlled by JOHNSON.

Federal law and the city’s conflict of interest prohibitions related to the distribution and receipt of the Community Development Funds prohibit any person, or family of a person, who was an employee, agent, consultant, officer, or elected official or appointed official of the BSSDC or the city, from personally benefitting from the funds.

Counts 9 through 13 of the indictment charge JOHNSON and JAMISON with falsifying JOHNSON’s Individual Income Tax Return, Form 1040, for the calendar years of 2014 through 2018. JOHNSON and JAMISON allegedly failed to report additional income from their scheme and inflated the value of JOHNSON’s itemized deductions.