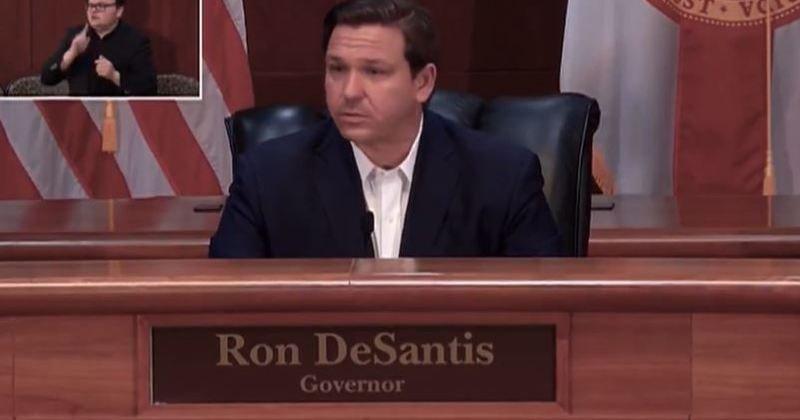 Florida Governor Ron DeSantis is proposing an expansion to the state's Stand Your Ground law that would allow armed citizens to shoot and possibly kill anyone they suspect of rioting or looting.

DeSantis drafted the so-called 'anti-mob' legislation in response to months of unrest around the country this year. In some instances, peaceful protests against police brutality gave way to violence and looting, including Florida.

The governor is seeking to expand Florida's list of 'forcible felonies' to justify using force against people engaged in looting and 'criminal mischief' that disrupts a business, according the Miami Herald.

If it passes, DeSantis' legislation could widen Florida's Stand Your Ground law to allow citizens to use lethal force even if they don't feel their own personal safety is at risk.

DeSantis' proposal comes weeks after he vowed to crack down on 'violent and disorderly assemblies' - referencing protests against racial injustice that have roiled the nation since the May 25 death of George Floyd in Minneapolis.

The governor hopes to curb those assemblies by permitting violence against anyone involved in the 'interruption or impairment' of a business.

The draft version of the law states this can include someone suspected of looting, which is defined as 'burglary within 500 feet of violent or disorderly assembly.'

The legislation also includes measures that would classify blocking traffic during a protest as a third-degree felony, and would grant immunity to drivers who unintentionally kill or injure protesters blocking traffic.

It would also allow the state to withhold funds from local governments and cities that cut police budgets.

DeSantis circulated a draft of his proposal to the state's Senate Committee on Criminal Justice and the House Judiciary Committee last week after he won re-election, according to the Herald.

The proposal immediately sparked outcry from critics who called it dangerous, unconstitutional and 'clearly political'.

'It also allows for death to be the punishment for a property crime — and that is cruel and unusual punishment.

'We cannot live in a lawless society where taking a life is done so casually and recklessly.'