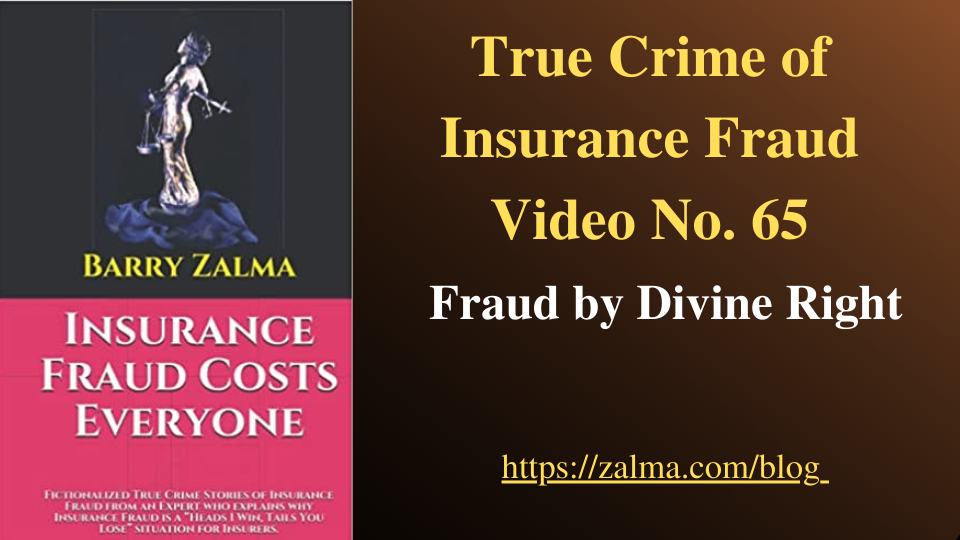 They were All-American girls. Muffy and Buffy met each other as cheerleaders in high school. They were best friends. They did everything together. The two young women shared everything from clothes to boyfriends.

Muffy and Buffy needed money so they acquired an insurance policy and decided to make a fraudulent claim.

Muffy and Buffy, honestly, reported that they had not replaced a single item they had claimed stolen in their first burglary. The things taken in this burglary from their vehicle were all items they purchased before the first loss. They even provided receipts and canceled checks establishing the purchase and the date of purchase of each item. After that the adjuster was convinced. There was no doubt, they had attempted a fraud. He reported his conviction to the Fraud Division of the California, Division of Insurance, and to Buffy and Muffy.

Buffy and Muffy admitted to the adjuster that the watches were never stolen in either claim.

He reported the claim to the Fraud Division who agreed it was a fraudulent claim and presented it to the local district attorney. The District Attorney refused to prosecute on the grounds that there was insufficient evidence to guarantee a conviction.

Muffy and Buffy went back to work at the bank. They hired a lawyer who threatened to sue if the claim was not paid in full. Since there was no arrest the insurer felt vulnerable. It paid $60,000 to obtain a general release.

Muffy and Buffy lived comfortably for a while on the money the lawyer obtained for them. They were determined to, and continued to, commit insurance fraud once every few years, to supplement their income.

Although states pass statutes making insurance fraud a crime and statutes and regulations requiring insurers to do thorough fraud investigations, until they compel local police and prosecutors to prosecute the crime and judges to sentence the perpetrators to jail and people like Muffy and Buffy will continue to live well off their crime.

Please log in to like, share and comment!
Search
Sponsored
Categories
Read More
Science
OUR STAR IS OUR LIFE CREATOR
THE SUN AND DISEASE https://www.youtube.com/watch?v=stImLB3qyUc MAN CANNOT CREATE LIFE, THEREFORE...
By Nibbie Chase 2020-05-05 12:29:11 0 551
Other
A Video Explaining Some of the Cases that Gave Birth to the Tort of Bad Faith
Read the full article at...
By Barry Zalma 2021-04-07 13:04:56 0 372
Politically Incorrect
HOT MIC: All Trustees Of School Board Resign After Mocking Parents Wanting Schools Reopened
The trustees of a northern California school board, caught on videotape mocking the parents of...
By Wym Creator 2021-02-22 13:50:56 1 467
Other
Video Proves Intentional Act
Punching a Person in the Face is an Excluded Intentional ActRead the full article at...
By Barry Zalma 2022-07-13 13:37:38 0 401
Other
A Video Explaining Common Tactics to Set Up an Insurer for Bad Faith
Bad Faith Set-Ups Defeat the Purpose of the Tort of Bad Faith Red the full article at...
By Barry Zalma 2021-05-06 12:38:20 0 396