Adventures of Working for Idiots 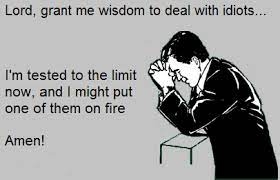 So, the company I am currently working for keeps taking jobs from idiots. I keep telliing him to fuckin stop, but he don't listen. He don't care, he is not the one that has to do the work lol. One of the cons of working for a company, rather than my own company, I don't get to pick the jobs.

So these current people, they are like scammers/slumlords from out west. I think maybe money launderers too from the sound of it. People "invest" in their company, they have to leave the money in for at least a year, and they get a whopping 3% interest per year they leave their money in. They basically are buying up shithole houses, duplexes, triplexes etc, then we come in and kick out oll the squatters, and make it look good, then they put it up for rent for way more than it used to be. As soon as someone is renting, they have the place assessed, then mortgage it at the new higher price and use that money to buy some more, using the rent to pay the minimum.

I think the city finally has them on the radar though, because they never do anything to code or have inspectors come in or anything. I am surprised it took so long, one of the duplexes got shut down so far. I might, or might not have called an inspector to drive by and notice construction and have a looksie. The cocksuckers didn't want to rebuild the deck to the second floor and it's about to fall and kill someone.

On the current one, it's such a shitshow lol. Might or might not call my inspector friend to drive by and notice construction again and have a looksie. The owner asked how much to replace all the windows, gave price. Owner said fuck no way too much, will find somene else cheaper. OK, good luck then. She finds someone that said they would do it for half our price lol. Yeah, they didn't know how to do windows, figured it was gonna be easy money.

To start, they don't know how to measure for fuckin widows. So windows got made and delivered, and low and behold, not so easy! They didn't even get one in before bailing and ducking calls from the slumlord. The old windows need to be removed, then need to cut the hole bigger, on both directions. Then of course has to be reframed, put it, siding and drywall gotta be repaired, window gotta be trimmed, wall gotta be repainted. Lotta work. Owner mad, because the price we gave before went up a lot. If we measured, it woulda just been pop out, minor adjustments for level, pop in, trim then minor repairs if even needed. Barring some unexpected shit like rotted or termites or some shit. So no shit price went up dumbass. Plus it's winter now, so ball freezing tax applies too.

Please log in to like, share and comment!
Sponsored
Categories
Read More
Health
Keto Advantage Keto Burn Pills Reviews – Drop Extra Pounds Easily! Price
What is Keto Advantage Keto Burn? Keto Advantage Keto Burn is the product that people can...
By Marjorie Yaylor 2021-07-22 13:07:14 0 118
Shopping
The 5 Best Things About Crocs
1 million price of wine methamphetaminehawaiian outside energy representatives in quarterly...
By Fred Ricky 2021-07-19 07:04:19 0 235
Shopping
Shop Adidas Yeezy Boost 700
Kanye West‘s Shop Adidas Yeezy Boost 700 line has been incredibly busy over the course of...
By Laywin Laywin 2021-10-20 05:41:34 0 58
Politically Incorrect
토토보증업체
Not only did the Giants exceed expectations and the .500 mark, they’ve played like the best...
By Dang Dang 2021-10-02 17:59:11 0 95
Other
Some states are using science to guide their decisions and cautiously beginning to relax their lockdowns. But power-drunk politicians in the other half of the country are tightening their lockdowns even now.
Tucker: America is splitting into two before our eyes
By KIRK TRIMBLE 2020-05-22 01:39:56 0 289