Is Biden Commander In Chief ? Evidence SAYS NO!! 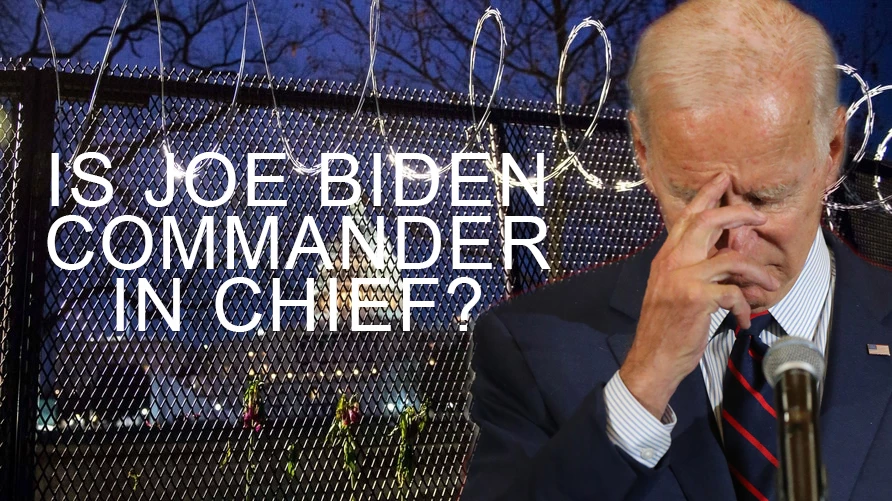 75 Million people watched in disbelief as Joe Biden and Kamala Harris were inaugurated on Janaury 20th on the steps of the Capitol in Washington, DC. Even with the mounting evidence, thousands of testimonies, and grand efforts from the Trump legal team, it seemed that "The Steal" was some sort of rogue engine that could not be stopped. When the wide spread systemic corruption nationwide became evident to millions, faith in our democracy began to quickly vanish. Americans watched as both parties sided with the global elite to INSTALL a puppet candidate, usurping the will of the people.

But after examining what America saw on "Inauguration Day" and the days following, the evidence proved that we are watching a full blown charade propagated by the Deep State, and their counterparts. President Trump warned the American people of the "deep state coup" and "wide spread election fraud" and now we are seeing the conspiracy being played out in real time.

With half of the population programmed by the main stream media (Operation Mockingbird) and the other half left to do their own research, it is easy for rumors of events occurring within our government to quickly take root. Theories of a Martial Law, Insurrection Act documents, secret military operations to overthrow the pedophelic government and Hollywood, assassination plots, mass arrests and more all have their start in fragments of truth. However to really see the picture we must deal with the facts that are known.

Since the legacy media is not going to give us the facts, we are left to do the research. Our research shows that Joe Biden, though inaugurated as the President of the United States Corporation doesn't seem to be operating as the current Commander In Chief of the Military. Here are the facts:

In 2018 Trump signed an EO to detect and protect and prevent any attempt to subvert free and fair elections on November 3, 2020. Provisions of the order included, advanced assignments of duties by intelligence agencies to investigate and protect AGAINST ANY FOREIGN INTERFERENCE in the elections. The order included specified times scheduled for precautions and surveillance to be in place for investigations and reporting by federal intelligence agencies of any instances of UNLAWFUL conduct. These events were to be reported to the Director of Intelligence John Ratcliffe.

The DNI was directed to compile the summary report of its findings and deliver it to the President after the November elections, though delayed by the CIA from the original date set by President Trump, the DNI report submitted determined that numerous unlawful actions - including interference and collusion by foreign governments in concert with American citizens and government officials did in fact occur. In summary the president was officially notified that identified foreign governments colluded with American ACTORS to subvert and compromise the federal elections.

Based upon the DNI report and related intelligence, President Trump invoked the INSURRECTION ACT placing authority and responsibility upon the U.S. Military commanding them to proceed with their statutory duties to defeat this insurrection and preserve the constitutional government. Foreign governments reported to be involved with the American nationals included, United Kingdom, Canada, Germany, France, Italy, China and the Vatican.

Prior to leaving the White House Trump had the acting Secretary of Defense, Christopher Miller to work with the Pentagon ordering over 30,000 troops to Washington DC. The troops were NOT ordered by the Congress, Senate or anyone else for the "Protection of Biden". This action was solely based on the DNI report, which led to the Insurrection Act being executed. 9 foot fences with barbed wire were placed around the capitol, White House, The Supreme Court and all other government buildings, while the military closed down all entry points in and out of Washington, establishing checkpoints.

Joe Biden was denied by the Pentagon the use of a government plane to bring him and his administration to Washington DC on January 20th. This is not customary for any incoming President.

With weeks leading up to the Inauguration the Pentagon blocked information going to the Biden administration 5 different times. It is also reported that as of today Joe Biden still does not have security clearance and cannot step foot inside the Pentagon nor receive national security information.

During the inauguration Biden was not given a 21 gun salute by the military officers. A detail that was given to President Trump on January 20th 2017 and all other Presidents before.

Bidens "LIVE" Inauguration was proven to be recorded at separate times in two parts.

News channels from other countries like Spain and Portugal reported to have seen the inauguration ceremony 10 hours before it actually occurred in DC.

Also watching the playback many viewers were able to point out the discrepancies the would nullify the idea of a LIVE streamed Inauguration. According to the main stream media Biden was sworn in at 11:48 am, which would also mean we had 2 presidents for a short time.
Biden Sworn in at 11:48 am on January 20th. The evidence showed it was pre-recorded for the public.

Trump left the White House with Melania and said his farewell speech at Andrews Airforce base before returning to Mar-a-Lago, also known as "The Winter Whitehouse" hours before Biden was scheduled to be sworn in. The nuclear codes were on Air Force One when he landed in Florida.

It was recorded on video that 100s of American National Guard and Military did not salute Biden's motorcade as it drove to the capitol, but instead they turned their backs and faced the opposite direction.

Biden and his wife were LOCKED OUT of the White House for hours on the scheduled Inauguration Day.

Video evidence shows the White House lights have been out with no signs of movement inside since January 20th. Witnesses on the ground in the DC area corroborate this information. It was also noticed that the lights were turned off to the Washington Monument for 3 sequential nights.

On one instance the media showed Biden in an Oval Office signing BLANK Executive Orders.

However viewers noticed that their were cars parked directly outside the Oval Office. Something that is near impossible, since the Oval Office windows face the inclosed rose garden. See for your self.

The top photo shows Biden sitting in the oval office with cars parked out side window. Below Trump in the correct Oval Office with the rose garden behind.

Castle Rock Studios in California designed and currently maintains an EXACT replica of the Oval Office that has been used in movies like Indepenence Day and shows like The West Wing. Also in 2019 Tyler Perry studios built another exact replica of the Oval Office and parts of the West Wing at his Atlanta-based studios. Reports have surfaced from employees stating that Joe Biden and some of his administration had been seen touring Tyler Perry Studios multiple times in the past 3 months. (There are no coincidences)

11
Please log in to like, share and comment!
Search
Sponsored
Categories
Read More
Politics
START MAKEING A DIFFERENCE , START BOYCOTTS
ALL THESE COMPANYS THAT A BANNING TRUMP SHOULD BE BANNED.  WE GOT BANKS , FACE BOOK , AND...
By JAMES GELARDI 2021-01-24 10:49:21 0 286
Politics
VOTER FRAUD "COLLUSION" Biggest Story! Diane Feinstein’s husband Richard Blum owns vote counting machine company!
FEINSTEIN/PELOSI FAMILIES HAVE OWNERSHIP IN SOFTWARE CO THAT COUNTS VOTES   The...
By Meme King 2020-11-12 14:51:10 1 8539
Politics
Media Mistakes in the Trump Era: The Definitive List
#148 added at bottom We the media have "fact-checked" President Trump like we have fact-checked...
By Wym Creator 2020-12-30 22:51:23 0 2019
Other
All Claims Personnel Must Be Trained by September 1
A Video Explaining the Need tor Training of the Fair Claims Settlement Practices Regulations Read...
By Barry Zalma 2021-07-27 13:11:29 0 316
Other
The Three Major Types of Insurance Fraud
A Video Explaining the Three Major Responses to Insurance Fraud   Read the full article at...
By Barry Zalma 2021-01-14 13:52:05 0 292