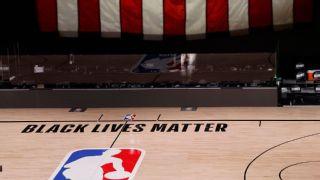 Labor crisis my ass. This was a stunt to get in the good graces of the kinds of lobotomites that Rittenhouse just got done blowing away. After seeing the kind of drop in ratings that the NFL saw when Kaepernick pulled this crap, why would they even try this in the first place? And even then, they only boycotted for a day, which made them look all the more pandering and in it for the money – which is all it can ever be about when a multibillion dollar organization like the NBA is involved.

Not only does this show everyone just how spineless and cowardly the NBA executives are for doing this in the first place, but how little the players actually give a shit about the political platitudes they espouse as well. No questions asked, they went right back to playing. They could have banded together for their dumb little made up cause, but they snapped right back into line when their masters cracked the whip. Pathetic.

I’ve never been much of a sports guy – much less a basketball guy – but I fail to see how this little half-posturing is suppose to appeal to anyone. The non-political viewers (that is to say MOST of them) will be turned off by the SJW sentiment and the SJWs will be pissed for giving up on the strike so early. They actually managed to piss off everyone in a 24 hour period. That is such impressively terrible leadership. You’d think it would have had to be an intentional decision to sabotage the NBA. They were already bleeding money from the overzealous lockdown shit and now they seemed determined to go under by being Twitter’s bitch. Was banning Free Hong-Kong shirts not enough of a wake-up call? What are these people doing?

But you know what? I don’t much care. If professional sports going under I think a lot of people would be better off. If a kid doesn’t aspire to be a professional athlete with a fucking sneaker deal than maybe they’ll focus their efforts on actually making something of themselves. Too many kids see these blowhards and forgo learning real skills to impress talent scouts and then wonder why they can’t get jobs. Open try-outs, not school sports, should be the way to go. Society’s collective intelligence will make great gains for it – granted they aren’t public schools with teachers unions.

Alternatively, the more professional sports that die out, that opens the door for REAL sports to build up a following and move into the spotlight. Like Rugby, or Paintball, or Jet ski jousting. That’s where the REAL money is. Not a bunch of millionaires safely running from one end of the arena to the other with a ball for four goddamn hours. Where’s the entertainment in that? You want to be a rich athlete? Than like the Romans, you’d better be ready to bleed for it.